The Idea Behind Plastination

“I developed the Plastination technique at the University of Heidelberg’s Institute of Anatomy in 1977, patented it between 1977 and 1982, and have been continually improving the process ever since.

When, as an anatomy assistant, I saw my first specimen embedded in a polymer block, I wondered why the polymer had been poured around the outside of the specimen as having the polymer within the specimen would stabilize it from the inside out. I could not get this question out of my mind. A few weeks later, I was to prepare a series of slices of human kidneys for a research project. The usual process of embedding the kidneys in paraffin and then cutting them into thin slices seemed like too much wasted effort to me, as I only needed every fiftieth slice. Then one day, I was in the butcher shop in the university town where I was studying, and as I watched the sales woman slice ham, it dawned on me that I ought to be using a meat slicer for cutting kidneys. And so a "rotary blade cutter," as I called it in the project-appropriation request, became my first Plastination investment. I embedded the kidney slices in liquid Plexiglas and used a vacuum to extract the air bubbles that had formed when stirring in the curing agent. As I watched these bubbles, it hit me: It should be possible to infuse a kidney slice with plastic by saturating it with acetone and placing it under a vacuum; the vacuum would then extract the acetone in the form of bubbles, just as it had extracted air before. When I actually tried this, plenty of acetone bubbles emerged, but after an hour the kidney was pitch black and had shrunk. At this point most people would have dismissed the experiment as a failure, and the only reason I went ahead and repeated it a week later using silicone rubber was because my basic knowledge of physical chemistry told me that the blackening effect was due to the index of refraction of the Plexiglas, and that the shrinkage could be attributed to having permeated the specimen too quickly. The next time, I carried out this process more slowly, using three successive silicone baths as a means of preventing a single bath (along with its contents) from curing too quickly. After curing the specimen in a laboratory kiln, I had the first presentable sample of Plastination.

That was on January 10, 1977, the day that I decided to make Plastination the focus of my life." 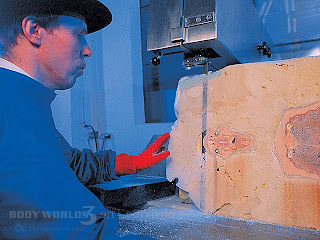 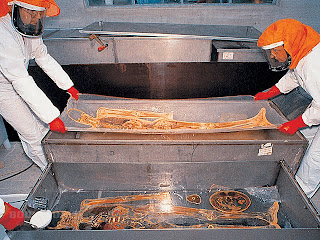 Decay is a big obstacle to the study of anatomy, so scientists have been searching for centuries for suitable preservation techniques. With the invention of plastination, it has become possible to preserve decomposable specimens in a durable and lifelike manner for instructional, research and demonstration purposes. During a vacuum process, biological specimens are penetrated with a reactive polymer developed specifically for this technique. The class of polymer used determines the mechanical (flexible or hard) and optical (transparent or opaque) properties of the preserved specimen. Plastinated specimens are dry and odorless; they retain their natural surface relief and are identical with their state prior to preservation down to the microscopic level. Even microscopic examinations are still possible. The plastination technique replaces bodily fluids and fat with reactive polymers, such as silicone rubber, epoxy resins, or polyester. In a first phase, solvent gradually replaces bodily fluids in a cold solvent bath (freeze substitution). After dehydration, the specimen is put in a solvent bath at room temperature to dissolve and remove the fat. The dehydrated and defatted specimen is then placed into a polymer solution. The solvent is then brought to a boil in a vacuum and continuously extracted from the specimen. The evaporating solvent creates a volume deficit within the specimen, drawing the polymer gradually into the tissue. After the process of forced impregnation, the specimen is cured with gas, light, or heat, depending on the type of polymer used.

“Slice plastination” is a special variation of this preservation technique. When applying this method, whole bodies or body parts (mostly deep-frozen) are first cut or sawed into 2-8 mm thick slices. These slices are then placed between wire nettings, where they are dehydrated, defatted and finally saturated with polymers in a vacuum. The impregnated slices are cured between sheets of film or cast with additional polymers in a flat chamber composed of glass plates to give them a smooth surface. The refraction index of the applied resins determines the optical properties of plastinated body slices. Body and organ slices produced with epoxy resins result in transparent specimens with good coloration of individual tissues. Polyester resins permit an excellent distinction between white and grey brain matter and are thus used for the plastination of brain slices. Plastinated organs and body slices are a novel teaching aid for cross-sectional anatomy, which is gradually gaining importance and can be easily correlated with radiological imaging. Series of transparent body slices are helpful for a large variety of scientific research activities. In addition, they are a suitable diagnostic means in pathology, as they allow rapid macroscopic and diagnostic screening of entire organs or operation preparations. Additionally, they still allow for selective analyses of pathological tissue regions with conventional microscopic methods.

Gunther von Hagens invented plastination at the Institute for Anatomy at Heidelberg University in 1977, and has developed it further ever since. Plastination has gained general acceptance and is carried out in many institutions throughout the world. The durability and lifelike state of plastinated specimens as well as their high instructional value have contributed to this acceptance. For more information about plastination, visit the BODY WORLDS website
No comments:

Plastination - Discover the Mysteries Under your Skin 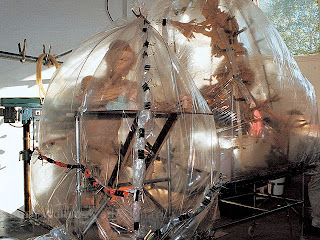 It takes an average of 1,500 hours to transform a cadaver into a full-body plastinate. But the resulting specimen is everything that a conventional model is not — an intricate and authentic representation of the once living human body. Plastination is a vacuum process in which a body’s water and fat content are replaced by fluid plastic, which later hardens to retain all tissue structures. The German anatomist Dr. Gunther von Hagens invented plastination in 1977. The technique allows the general public to enjoy fascinating insights previously available only to medical students in dissection rooms.

SPIRIT OF THE RENAISSANCE

The development of plastination marks the beginning of a new era in anatomy, a field of study that can be traced to the times of the pharaohs. In the 15th century, Leonardo da Vinci produced realistic sketches of the dissected human body, and in 1543 Andreas Vesalius pioneered modern anatomy with his precise drawings. These masters explored the mysteries of bodily interiors when external beauty was most revered. BODY WORLDS at MOSI connects with this spirit of enlightenment by presenting a new look at the human body that is both tangible and accessible.

What is BODY WORLDS? 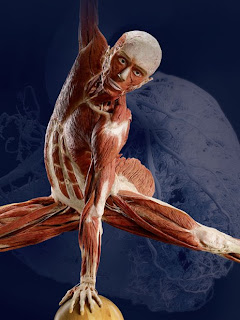 Gunther von Hagens’ BODY WORLDS exhibits are the first public anatomical exhibitions of real human plastinates. Since 1995, more than 26 million visitors have viewed the exhibits at venues in cities across Asia, Europe, the United States and Canada. The primary goal of BODY WORLDS is health education. On the one hand, individual specimens are used to compare healthy and diseased organs, i.e., a healthy lung with that of a smoker, to emphasize the importance of a healthy life-style. On the other hand, life-like posed whole-body plastinates illustrate where in our bodies these organs are positioned and what we are: naturally fragile in a mechanized world.

The exhibits help visitors to become aware of the naturalness of their bodies and to recognize the individuality and anatomical beauty inside of them.

The authenticity of the specimens on display is essential for such insight. Every human being is unique. Humans reveal their individuality not only through the visible exterior, but also through the interior of their bodies, as each body is distinctly different from any other. Position, size, shape, and structure of skeleton, muscles, nerves, and organs determine our "interior face." It would be impossible to convey this anatomical individuality with models, for a model is nothing more than an interpretation. All models look alike and are, essentially, simplified versions of the real thing. The authenticity of the specimens, however, is fascinating and enables the observer to experience the marvel of the real human body.

It is also important to note that the plastinated specimens on display in Gunther von Hagens’ BODY WORLDS exhibitions—excluding a small number of specimens acquired from anatomical collections and anatomy programs—stem from a unique Body Donation Program established in Heidelberg, Germany in 1983, later managed by the Institute for Plastination established in 1993.

Currently, the Institute for Plastination has a donor roster of 9,200 individuals which includes nearly 9000 Europeans and 800 North Americans. All IfP documents relating to donated bodies have been scrutinized and approved by two ethics committees formed by the California Science Center in Los Angeles and the Museum of Science and Industry in Chicago, where BODY WORLDS exhibitions took place in between 2004 and 2008.

Just an interesting astronomy history tidbit this time – On this day 399 years ago, January 13, 1610, Galileo Galilei discovered Ganymede, Jupiter’s largest moon and the largest moon in our solar system.

Earth was at its closest point to the Sun (91,400,939 miles), which is called perihelion, in its orbit on Sunday, January 4th. We are actually closest to the Sun in the winter (for the northern hemisphere) and farthest from the Sun during the summer in July, called aphelion, on July 3rd this year, when Earth will be 94,505,048 miles from the Sun.

The bright standout in the evening sky right now after sunset is Venus.  This Thursday, January 14th, Venus reaches is greatest angular distance East of the Sun, 47 degrees.  This means that it will be as high in the sky after sunset as it can get, so the next week or so will be a great time to admire the brilliant “evening star” (weather permitting, of course.)

Discover the Mysteries Under your Skin

When you look inside, you'll see the brain looks like a giant, wrinkled walnut.

This brain has been preserved through plastination, which is a groundbreaking method for specimen preservation invented by Dr. Gunther von Hagens.  An anatomist and lecturer at University of Heidelberg, Dr. von Hagens invented the palstination technique in 1977 as an alternative to the usual method of preserving specimens by imbedding them in solid blocks of plastic.  He wanted to be able to touch the specimens and examine them more closely.  The value of plastination to anatomy studies was immediately obvious.  Dr. von Hagens spent the next 20 years refining the process, making improvements and modifications as he worked.
No comments:

The heart beats around 3 billion times in the average person's life.
A "heart beat" is really the sound of the valves in the heart closing as they push blood through its chambers.
Your heart beats some 30 million times a year.
No comments: