Duke Ludovico Sforza, known also as il Moro. During this period Leonardo da Vinci created masterpieces of both art and science which help to demonstrate the breadth of his accomplishments. Many of his machines we designed for defense of Milan or to increase her military strength against enemies.

In an introductory letter to Duke Ludovico preserved in the Codex Atlantico, Leonardo wrote “I can make armoured cars, safe and unassailable, which will enter the serried ranks of the enemy with their artillery, and there is no company of men at arms so great that they will break it. And behind these the infantry will be able to follow quite unharmed and without any opposition."

One of da Vinci’s incredible military designs is the armored vehicle. This turtle-like device allows for eight men inside to move through enemy lines without injury. Inside, four wheels can be powered by cranks to move the tank without the need of horses. Small cannon are spaced around the edge of the tank allowing the soldiers inside to fire upon enemies while remaining protected.

The original plans for this design have front and back wheels geared in opposition which renders the tank unable to properly move. It has been suggested that da Vinci designed the flaw purposely so that if his plans were stolen the machine would be unusable.

The first modern tank was not realized until WWI with the premier of ‘Little Willie’, a 14 ton armored vehicle that could carry three men in cramped conditions at a top speed of two to three miles per hour. You can learn more about the development of the modern tank at this link.

A beautifully constructed model of da Vinci’s armored tank design can be seen inside the da Vinci: The Genius exhibit. Through an open door you can see the crank driven wheels and other innards of the design.

Treasures of the Modern Renaissance: Reichsadler-humpen

The Reichsadler-humpen: A test and a masterwork

The Reichsadler-humpen is a style of enameled German glass, which

displayed the Heraldic representation of the parts of the Holy Roman Empire. It was an important piece to the patron, the recipient, and the artist. The double headed eagle was used as the centerpiece to represent the Holy Roman Empire and signified with its’ outstretched wings the embracing of all of its parts. “The breast bears either a crucifix, indication of the God-willed protectorate of the Emperor or, more frequently, the orb of state, the Emperor’s secular symbol.”

“The wings are usually covered by fifty-six shields; flaming coronal motifs, symbols of the Order of the Golden Fleece, are put along their edges. With the exception of the top row which includes the seven Electors and, for the sake of symmetry, the Apostolic See, they have shields are arranged in vertically oriented groups of four. They represent the Quaterniones Inperii, the ‘reichsständige Quatuorvirate.’ The idea was to have four representatives of each category

and profession within the structure of the Holy Roman Empire, thus forming on great ‘democratic’ body”

The Quaterniones Inperii, the ‘reichsständige Quatuorvirate is a collection of engravings and woodcuts. The first known copy dates to 1460 in Peter von Andlau’s De Imperio Romano.

The ribbons above each shield are the names of those arms listed and the ribbons at the bottom of each row identify the particular group. The symbols of the Order of the Golden Fleece most often found are the flaming and crowned flint stone. Many Reichsadler pieces bear the names, coats of arms, initials and other designations of the owners. Ninety-five percent of the known pieces where enameled on the humpen style glass. The theme of these pieces was enameled with different stylistic motifs. Glass Curators can categorize the known

period pieces by these features and can identify the location and/or school of origin.

To the artist, this was an important piece. As this piece was very difficult to complete, their Masters used it as a test for apprentices as a final piece. Glass enamellers were given the task of enameling the piece in one and a half days. If the piece was completed in time and to the expected level of expertise, the student was then elevated to the rank of Master Glazier (glass enameller).

About the Artist: Cyndi Maners

Another item spotlight from da Vinci: The Genius : The da Vinci bicycle.

A drawing astonishingly close to the modern bicycle

View Full Album
was attributed by some to Leonardo da Vinci but now it is refuted as a later addition by a student of da Vinci’s or more likely as a modern hoax.

Discovery of the Sketch: During restoration work on the Codice Atlantico in the 1960’s, a curious drawing came to light. Hidden behind a mat frame was a small sketch of a two wheeled vehicle, so similar to that of a modern bicycle that it was truly a shock. Although thought of initially as a wonderful new find, the drawing quickly came into question. Many have suggested that the work is a modern forgery and that the drawing style employed is very different from that of Leonardo da Vinci. A great number of convincing articles have been presented showing reasons to suggest that the sketch is a hoax, however the sketch continues to capture the imagination of da Vinci enthusiasts. To learn more, check out this article on the da Vinci Bicycle Hoax.

This gorgeous reproduction of the bicycle sketch in the Codice Atlantico presents a machine that da Vinci likely did not conceive, however so many of its workings could easily be adapted from inventions that Leonardo truly did devise.

About the Codice Atlantico: Pompeo Leoni, a 16th century sculptor collected Leonardo da Vinci’s notebooks and drawings and bound them into a collection. The Codice Atlantico is a twelve-volume set of 1,119 pages dating from 1478 to 1519 and consists of all sorts of drawings attributed to da Vinci. The Codice is currently housed at the Biblioteca Ambrosiana, Milan.

A Bicycle is born: Credit for the modern bicycle is often attributed to Pierre and Ernest Michaux, Parisian carriage makers who presented the two-wheeled pedal-operated velocipede in the 1860’s. Pierre Lallement, an employee of Michaux, claimed the design had been stolen from him and moved to America to established his own company in Connecticut. Lallement registered the first bicycle patent in 1866. The patent was bought by Albert A. Pope and the design was produced and marketed as the Columbia bicycle.

Another item spotlight from Treasures of the Modern Renaissance, a collection of Renaissance art pieces created by modern Florida artists.

This dress is based on the 1497 funerary sculpture of Beatrice d’Este and her husband, Ludovico Sforza by Cristoforo Solari. The dress was originally created for the occasion of the baptism of her son. The dress sleeves were designed in the trendy “Spanish style” of the time, and the gown was burgundy in color with gold couching and silver tassels. Instead of recreating the dress exactly, the design was modified for outdoor wear and machine laundering. The color black was the most popular color of the Spanish Court in that time.

Beatrice d’Este (1475-1497) was Duchess of Milan and one of the most well known patronesses of art in Renaissance Italy. Leonardo da Vinci presented Beatrice with a beautiful portrait of herself as a wedding gift in 1491. Rumors have suggested that Beatrice may have been the inspiration for da Vinci’s Mona Lisa. Beatrice d’Este was entombed at Santa Maria delle Grazie in Milan, the same church in which da Vinci painted his Last Supper. 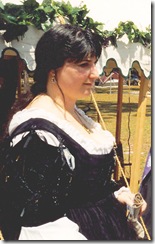 About the Artist: Lisa Pompeo

Lisa Pompeo currently works at Aspire Financial Services in the Retirement Plan Implementation Department. She is a self-taught seamstress and began early in life doing needlecrafts with her mother and sisters. She does all of her sewing on her Grandmother’s 1950 Singer machine. Lisa is known as Mistress Lisabetta Maria da Firenze, OL in the Society for Creative Anachronism.

Want a first look at da Vinci: The Genius? You got it! I previewed the exhibit with the press and took photos of a few favorite pieces in the exhibit. Here is the first of my favorites: The Vite Aerea!

"If this instrument made with a screw be well made – that is to say, made of linen of which the pores are stopped up with starch and be turned swiftly, the said screw will make its spiral in the air and it will rise high." -Leonardo da Vinci Manuscript B. folio 83 verso.

Designed to be made of reed, linen fabric and wire, this screw-like device could be operated by four men turning cranks on the shaft of the screw. This design is meant to compress air and thus obtain flight. Described now as the ancestor of the modern helicopter, this design was sketched by da Vinci but never constructed.

In da Vinci: The Genius you can see the Helical Air Screw realized as a beautiful and towering machine. With no ropes around this machine

View Full Album
you can step under the broad canopy of linen and look closely at the workings of this creation.

Although many believe that weight constraints would keep this Aerial Screw from taking off into flight, it seems no less amazing to see. What a delightful mind Leonardo da Vinci had to conceive of such a concept!

With Da Vinci: The Genius Exhibition opening to the public this weekend we are getting ready to transport you to another time: The Renaissance. In the Grand Lobby at MOSI you can find an exhibit entitled Treasures of the Modern Renaissance which is a collection of Renaissance art pieces created by modern Florida artists. We’ll be highlighting pieces and artists from this exhibit here during the run of the Da Vinci exhibit.

The Milanese were exposed to Spanish and German clothing styles as a city along a key trade route. This hat, worn at an angle over a coif, is an example of the Milanese attempt to incorporate the fashions of other regions. The geometric patterns of the beading are borrowed from Moorish designs found in Spain.

About the Artist: Vandy Pacetti-Tune

Robert is a University of Florida graduate in Aerospace Engineering. He has been busily working with MOSI since July of 2009 and has contributed over 300 hours of volunteer service. Robert says that he enjoys his volunteer work at the museum because he loves science and is proud to have a part in bringing science to the community. As a volunteer Robert has helped to build and repair many of our exhibits and is a big part in bringing Da Vinci ‘online.’ We are grateful to have him as a part of the MOSI family!