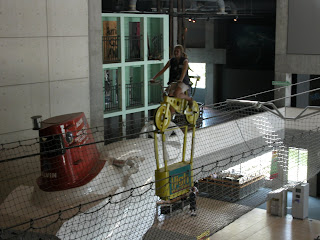 and she is smiling while she pedals!

So why does Sarah feel so comfortable on this bicycle so far above the ground? Well the net and the five point harness really help, but there is no way for the bike to tip over or fall off that wire. Hanging beneath the bicycle is a 350 pound counter weight which keeps the bike right side up.

Even with the weight of Sarah combined with the bicycle, the counterweight weighs much more and will always be pulling the bike back into the upright position even if Sarah were to get very brave and rock the bike back and forth.

So why is the net there? Two reasons: It makes people feel better and also catches shoes which might fall off before they land on someone standing on the main floor.

The BioWorks Butterfly Garden at MOSI rears and exhibits Florida native butterflies that are local to the Tampa Bay area. Butterflies can be seen in all life stages: eggs, caterpillars, chrysalis and adult butterflies. In BioWorks, the real message is how you can turn your own yard into a butterfly oasis by providing the right plants and habitat for native butterflies.

Kimberly writes “It is a beautiful and peaceful area that invites the eye and encourages thoughtful questions. It is especially wonderful when the knowledgeable staff can answer questions in regards to the butterflies, their lifespan and habits. Visiting the Garden is a quick and easy way to recharge so I can finish the rest of my workday.”

This sculpture entitled “Eye Maxed” can be seen in the lobby of MOSI’s IMAX Theater.

Created by sculptor Robert McNabb this piece incorporates the primary mirror (Collector) of our IMAX projector. The collector mirror reflects light from the 15kw lamp inside the IMAX projector to project the film image onto our gigantic domed screen. This particular collector was replaced some months ago and rather than becoming trash, this old and large part from the IMAX projector became art!

“Eye Maxed” is the favorite MOSI thing of MOSI’s IMAX Director, Zarth Bertsch. We invite you to come check out “Eye Maxed”, stay for a festive beverage in Bar 1570 and then catch a movie in the IMAX dome theater.

You can learn more about artist Robert McNabb at his website: http://www.mindinmetal.com/.

Volunteer of the Month for March 2011: Gene King

Gene has volunteered at MOSI since July of 2009 and so far has accrued over 400 hours of volunteer service.  Gene has been almost singlehandedly responsible for completely revamping our HAM RADIO volunteer program.  He has increased the size of the group and the number educational activities available to the general public.

Most notably, Gene brought the NATIONAL HAM RADIO day celebration to the MOSI campus this past summer with hundreds of participants from across the globe.  Thanks Gene, keep up the GREAT work!

Morning wake up calls have been a NASA tradition since the days of the Apollo missions when mission control staff would serenade astronauts with lines from popular songs. Since then, morning wake up calls are more often recordings of songs played to begin the day’s activities and are followed by a message from the CAPCOM in mission control. These recordings have included “Rocket Man” by Elton John, “I Feel the Earth Move” by Carole King, the Marine Corps Hymn, “Over the Rainbow” by Judy Garland and hundreds of other songs.

This morning’s wake up call to the space shuttle Discovery was not a favorite song of an astronaut, instead it was an iconic voice speaking over a piece of iconic science fiction music. At 3.23 EST this morning, William Shatner reprised the role of the Enterprise’s Captain Kirk and addressed the crew of Discovery with the following message spoken over the theme music from the original series of Star Trek: 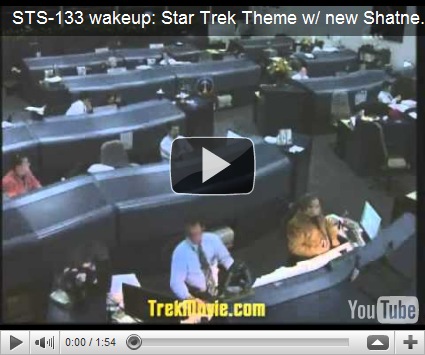 After 30 years of service, 39 flights and 13 trips to the International Space Station, Discovery will return just before noon on Wednesday to Kennedy Space Center in Florida for the last time.

For a full listing of morning wake up calls that have greeted astronauts, check out this list created by NASA historian, Colin Fries.

On the third floor of the main MOSI building, just to the right of the High Wire Bike there are seven small white balls that hang from the ceiling. When viewed from near the elevator or the balcony where you can enter Science Works Theater, this group of white globes goes mostly unnoticed and does not contain a familiar shape. Interestingly, this collection of orbs has a unique history at MOSI, which makes it one of our favorite things.

In 1995 MOSI opened its doors and contained exhibits on Florida, health and space. The 3rd floor space exhibit eventually became timeworn and the information out-dated so it was removed in 2010 to make way for our new high-tech health exhibit called The Amazing You. Portions of the exhibit, like a model Apollo capsule were relocated to other parts of the museum and the outdated

pieces of the exhibit were scrapped. This cluster of suspended globes is the last exhibit remaining in place from our selection of space science exhibits.

When viewed straight on from just to the right of the High Wire Bike, these orbs resolve into the familiar shape of the well known constellation the Big Dipper. These seven orbs represent the stars in the constellation and their relative distance to Earth:

one another, especially the star Dubhe which is quite distant from many of the stars in the constellation. Also known as The Great Bear or Ursa Major this constellation has been referenced throughout history including in the Bible as “the seven stars” (Amos 5.8) and in Homer’s Iliad as “the Bear”.

Although there are no longer signs to reference this display, the stars remain in place and are a great talking point for MOSI interactors and a great bit of trivia for our members and guests. The Big Dipper display was the first permanent exhibit installed at MOSI and is the favorite exhibit of long-time MOSI staffer Brian Albury.

Brian is the Director of Facility Operations and Information Technology for MOSI and has been with the museum for 16 years.