Mummies of the World Geocaching Challenge 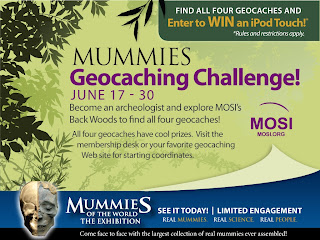 Aspiring treasure hunters and explorers can embrace their inner archeologist with the new Mummies of the World Geocaching Challenge, where modern-day GPS equipment and smartphones can double as treasure maps. The Geocaching Challenge will take place from June 17 – 30 in the Back Woods preserve behind MOSI.

Using a handheld GPS or the Opencaching phone app, explorers can hunt down geocaches (different types of hidden containers) containing special prizes and coordinates to other geocaches on MOSI property. There are four Geocaches hidden in the Back Woods area of MOSI. The first three stages all have free prizes, as well as the coordinates to the next Geocache. For the bravest and quickest Geocachers, the very last prize in the expedition will be a raffle for an 8GB Apple iPod.

Other prizes inside the geocaches include MOSI tickets and IMAX Dome passes, travel tags and geocoins. The “treasure” will be available starting Sunday, June 17.

All prizes are first come, first served. Though the contest doesn't officially end until June 30, the treasure may have all been taken by that time. Because of the nature of this game, MOSI cannot guarantee any prizes to Geocachers even if the Geocache is found within the contest dates.

Here’s the first clue. You must find this Geocache to get the coordinates to the second, third and fourth Geocache. Inside the fourth Geocache is the real treasure – a chance to win an 8GB Apple iPod!


Cache #1  (Coordinates to the second cache are inside this cache!)

This howler monkey is from the site of Grand Chaco, in Argentina, South America. It has not been radiocarbon dated, but it is likely that the monkey was naturally preserved in the warm, dry environment of the area and prepared for display, with a rhea feather skirt and feather wreath around its head and neck. To learn more about the Howler Monkey, visit Mummies of the World – the Exhibition here at MOSI.


Hint to help you find it:

See a side of KIC rarely viewed (the back side).

We are stashing 20 pairs of IMAX Dome Theatre tickets in this Geocache! The first few participants who make it to the Howler Monkey Cache get to see our IMAX film, Mummies: Secrets of the Pharaohs!