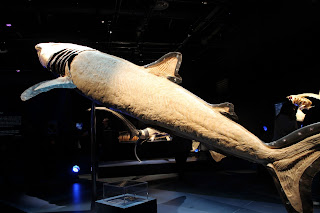 Like the human anatomy exhibits that now circle the globe, Sea Monsters Revealed uses the revolutionary polymer preservation technique commonly known as plastination to bring real sea animals onto dry land for an up-close and personal look at the most mysterious creatures the deep sea has to offer. Visitors will not only see the outside, but also the inside of the most elusive aquatic life ever discovered, including a 6-foot-wide manta ray, a 15-foot-long mako shark, a giant squid, and an 18-foot-long, 3,000 pound whale shark. All specimens in the exhibition are authentic, stunning examples of the mysteries that lie beyond our shores and have been carefully recovered in accordance with the highest animal protection standards.

“The oceans are Earth’s last frontier. Scientists have explored only 5 percent of its mysteries, leaving the remaining 95 percent to the imagination. Sea Monsters Revealed takes visitors on a journey of exploration in search of the elusive sea monster,” said the exhibition’s creator, . “The creatures in this exhibition are so massive, so impressive, and so magical, that you truly have to experience it to grasp its impact and importance.” 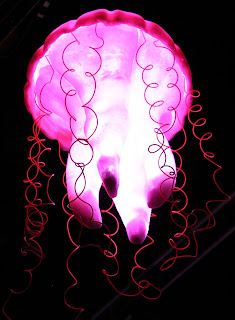 More than 18 full-body sea creatures will be on display, along with more than 150 individual organs and smaller specimens that define the life of the sea.

While these impressive sea creatures truly are the stars of the show, they are set in a multi-sensory environment unlike any other traveling exhibition. The exhibition’s theatrical and scenic elements take visitors back in time to an 18th century oceanographer’s study to learn about humanity’s fascination with the ocean throughout history via an interactive map table and lessons from the earliest natural scientists and explorers, demonstrating that logic and adventure are important elements in the pursuit of science. Moving forward, visitors will then enter a specially-built submersible, where they will descend to the depths to explore the sea floor and meet renowned ocean explorers such as Fabian Cousteau and Sylvia Earle. They will then have the opportunity to walk on the ocean floor among the giants of the deep. At the end of the exhibition, visitors will be able to engage with live sea creatures in a specially constructed touch pool – a first for a traveling exhibition.

Sea Monsters Revealed explorers will re-emerge from the depths of the exhibit with a greater understanding of the world’s oceans and our relationship to them as humans. Additionally, they will learn that the health of the oceans and preservation of these beautiful species is within our control through conservation initiatives around the globe. Guests will be given the opportunity to participate in these initiatives through follow-up conversations with programs such as the NOAA Marine Sanctuaries Program.

An immersive and interactive experience, Sea Monsters Revealed is the most comprehensive exhibition on the deep sea ever created. The exhibition’s passionate expression of the oceans is the result of a robust partnership between MOSI, BASE Entertainment, KRE8 360, Mote Marine Laboratory, MacGillivray Freeman Films, and The Cascade Game Foundry. Each of these groups has brought their expertise and experience to this project to deliver an exhibition that is rich in science, technology, history and interactive elements. Sea Monsters Revealed is funded, in part, by the Hillsborough County Board of County Commissioners/Tourist Development Council.

Sea Monsters Revealed makes a splash with its world premiere on Saturday, March 9 and will be on display at MOSI through Monday, Sept. 2, 2013. Museum hours are Monday – Friday, 9 a.m. – 5 p.m. and Saturday and Sunday, 9 a.m. – 6 p.m. Tickets are on sale now, and reservations are highly recommended. Tickets can be purchased by calling 813-987-6000 or visiting mosi.org.