As you can see in the video, the orange balls are being held up only by air blown out of the tubes on the Bernoulli Breezeball exhibit. By adjusting the direction of the tubes you can pass the balls from one airstream to another and eventually into the hoops at the ends of the table.

How does it work:
Moving air has less pressure (pushing power) than still air. Objects may look as if they are sucked into a stream of moving air but are actually being pushed into the stream by the stronger pressure of the air around the stream. When a ball is placed into an airstream, the air flowing upward hits the bottom of the ball and slows down, generating a region of higher pressure. This high-pressure region of air under the ball holds it up. If you try to pull the ball slowly out of the airstream, the air arcs around the ball and its pressure is decreased. The normal pressure on the other side of the ball pushes it back into the airstream.

Daniel Bernoulli:
The Bernoulli Breezeball exhibit is named for Daniel Bernoulli (1700-1782) who was a member of a Swiss family that boasted several famous mathematicians. Bernoulli applied mathematics to the fields of fluid mechanics and also pioneered mathematics work in probability and statistics. He taught at the University of St. Petersburg and later at the University of Basel where he successively chaired the departments of medicine, metaphysics and natural philosophy. Daniel Bernoulli is best known for 1738 publication Hydrodynamica and for Bernoulli's principle which describes the relationship of the speed of a fluid and its pressure.

Read more about Bernoulli's Principle applied to aerodynamics at the US Centennial of Flight Commission website.
No comments:

If you have ever wanted to learn a bit about amateur radio, I know a few MOSI volunteers who would be happy to talk to you. 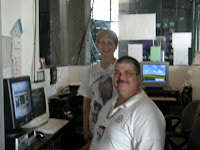 in the MOSI Disasterville exhibit on Wednesday mornings. Gene is a retired Tampa police officer who came to amateur radio for the services it can provide during disasters where regular forms of communication tend to break down. Gail is an avid birder who started working on her amateur radio license because it was something about which her husband was very passionate. From their backyard radio setup, the Kings have made contact with radio operators as far away as Slovenia, Australia and several location in South America. With just 60-70 watts of power and a "wire in a tree" antenna, this couple has been able to talk with people half way around the world!

In the KM0SI Truck, the Kings can show you current positions of the Hubble Telescope and the International Space Station or even show you how they contact other radio operators around the world.

What is Amateur Radio?
From Wikipedia: "Amateur radio, often called ham radio, is both a hobby and a service in

which participants, called "hams," use various types of radio communications equipment to communicate with other radio amateurs for public service, recreation and self-training.

Amateur radio operators enjoy personal (and often worldwide) wireless communications with each other and are able to support their communities with emergency and disaster communications if necessary, while increasing their personal knowledge of electronics and radio theory. An estimated six million people throughout the world are regularly involved with amateur radio.

The term "amateur" reflects the principle that Amateur Radio and its skilled operators are committed to helping communities without financial compensation; whereas Commercial Radio operates purely for profit."

The image to the right is the international symbol for amateur radio. The circuit diagram inside the diamond symbolizes components common to every radio: an antenna, inductor and ground.

Want to get involved in ham radio?
The National Association for Amateur Radio or ARRL website offers lots of great information for those who are interested in learning more about becoming a licensed radio operator. Also, the WeDoThatRadio website offers visitors the ability to search for local ham radio clubs in their area. If you are in Tampa, check out the Tampa Amateur Radio Club (TARC) website for local contacts and meeting times.

Drop by MOSI on a Wednesday morning and chat with the Kings or come by on a Thursday morning and talk to long time MOSI ham radio volunteer Fred. The volunteers of KM0SI are all friendly folks who are always happy to talk to someone interested in amateur radio. You can also email the friendly KM0SI volunteers at km0simosi@gmail.com.
1 comment:

What does a tornado look like up close and personal? Well, most of us really don't want to have a personal experience with such a force of nature just to satisfy our curiosity. A mist vortex is a safe way to get up close to and even touch a vortex. In this exhibit water vapor is released from a tank at the bottom and a fan at the top of the exhibit swirls the air and vapor into a vortex. The six posts on the exhibit all have tiny air vents that blow air in a single direction that helps to corral the water vapor and keep it turning in a tornado-like vortex.

Originally designed at the Exploratorium during an artist in residence program, mist vortexes have become a great way to show science center guests how a tornado looks up close. Our mist vortex is located on the second floor of MOSI's main building in the Disasterville exhibit Tornado section. MOSI's Disasterville exhibit also educates guests about floor, hurricanes, tsunami, wildfire, earthquake, lighting, volcano, hail and other forces of nature with awesome destructive power. To know how these disasters work helps people to prepare plans for what do do if a natural disaster ever touches their lives. 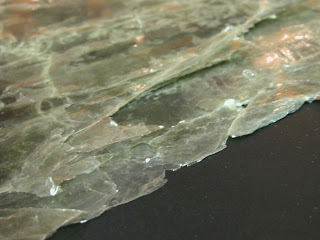 Known also as Common Mica or Isinglass is a common mineral found in igneous, metamorphic and sedimentary rocks. Muscovite occurs in a variety of brown, gray, yellow and smoky green colors but can also be found in transparent and translucent forms.

The name muscovite derives from the term Muscovy-glass as sheets of this minerals have been used as windows in Russia. The base of this names come from the Latin word "micare" which means "to shine". 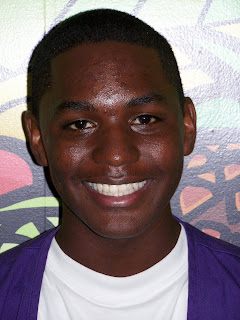 Deamyon “Dae” Myles is the volunteer of the month for September 2009.

He is an excellent example of brilliant guest service and is consistently looking, seeking and finding ways to enhance a guest’s experience at MOSI. Deamyon is always ready with a smile and helpful attitude. In addition to working as a Greeter and Volunteer InterActor, “Dae” also comes in for 3 hours on Saturday to dress as Scooby Doo and/or Dexter to entertain our guests. Congratulations Deamyon, your hours of tireless service are much appreciated and your support makes MOSI a better place staff and guests alike!
No comments: